Mrs. Horne is in San Diego celebrating our grandson’s 3rd birthday so I invited my favorite crew members Rudy and Peter down for a boys weekend on Buzzards Bay.

The forecast was good, but we woke up to pea soup fog. My weather app said it would burn off by 8:00 so we stayed with the plan to go to Martha’s Vineyard.

MBY owner Dave Kaiser owns a mooring in Edgartown and he’ll generally let me borrow it unless someone else has already put dibs on it. I texted Dave and he said “sure, we’re on it now but we’ll be leaving this morning once the fog lifts”.

We took off with Edgartown as our destination around 10:30 amid the fog. I had to fire up the radar right away as we started running into fog banks ranging from 1/4 mile to near zero visibility. As we did, I gave Peter a quick lesson watching the radar and I’m glad I did.

As we stared at red blips on the screen surrounded by gray, I noticed we were 1/8 of a mile from Woods Hole. I could barely see the buoys as I nearly hit them. No sight of land.

We also noticed that buoys looked huge on radar, power boats looked a little smaller, and sailboats were almost invisible.

Although I love and trust Buddy (my Garmin autopilot), I always shut him off and steer the old fashioned way when I go through Woods Hole.

Although I still couldn’t see anything, I told Peter to man the radar, dropped down to 10 mph, and put Buddy on standby.

As I starred down at the GPS screen, I still couldnt believe that I’m in mouth of the hole – I could not see anything!

Suddenly I saw a guy in a 10′ inflatable crossing the hole right in front of me. Reading my mind Peter said ” he never showed up in radar”.

Then the first Green Day marker emerged from the fog about 100′ off the starboard bow.

And with that, I got a mild panic attack realizing how tight the Hole really is. I looked at Peter and I saw a little panic on his face too. The radar was a sea of red blips due to all the channel markers in Woods Hole.

I also realized that there was a strong current and 10 mph wasn’t giving me enough headway to hold Vigilant on course. So I took it up to 16 mph and handed Buddy the helm. I know the autopilot holds a course better than I do and I really wanted to look ahead just in case something jumps out of the fog.

“The Worst I’ve Ever Seen”

As Buddy made the turn after the second Green Day Marker, Dave Kaiser and his 50′ Grand Banks jumped out of the fog on a near collision course.

I quickly took back the helm and ease us to starboard, waving to Dave who’s up on the flying bridge looking as nervous as I felt.

I looked at Peter and I said “didn’t he show up on the radar?”

Peter said “I thought he was a buoy”. Lesson learned.

Let’s Just Do The Black Dog

It turned out that Woods Hole was the worst fog of the morning, but we still couldn’t see anything as we passed West Chop.

Suddenly Martha’s Vineyard popped out of the mist and I looked at the boys and said “let’s just do the Black Dog.”

It’s September 16 and I was thinking the Black Dog Wharf had already flipped over to their shoulder season program where you tie yourself up and put $15 in the honor box. After briefing the boys on the nuances of docking with all pilings on a fixed pier, I headed for the prime spot at the end on the pier.

As I was pulling in, I could see Peter talking to you lady Dockmaster and he said “she wants to know what you draw”. This is never a good question.

I went back to the cockpit and told her “four feet” and she said “head in by the beach and tie up to port.”

As I eased around the slips I saw the only open spot was literally just in front of the beach. I turned on the Foreward Sonar and all I saw was 4 feet of water.

I nudge in, thrust us in to the spot and still showed 4 feet all the way in. It did feel like the bow was on the beach. 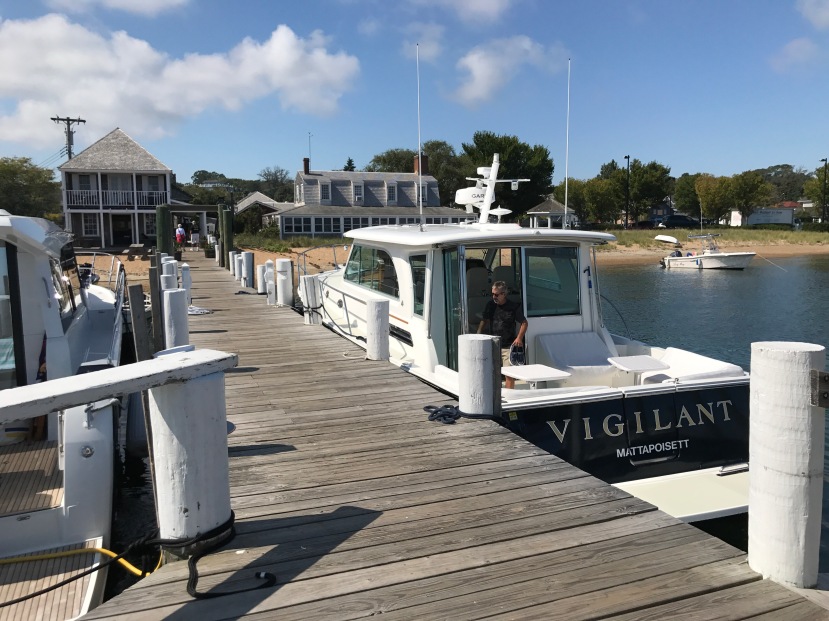 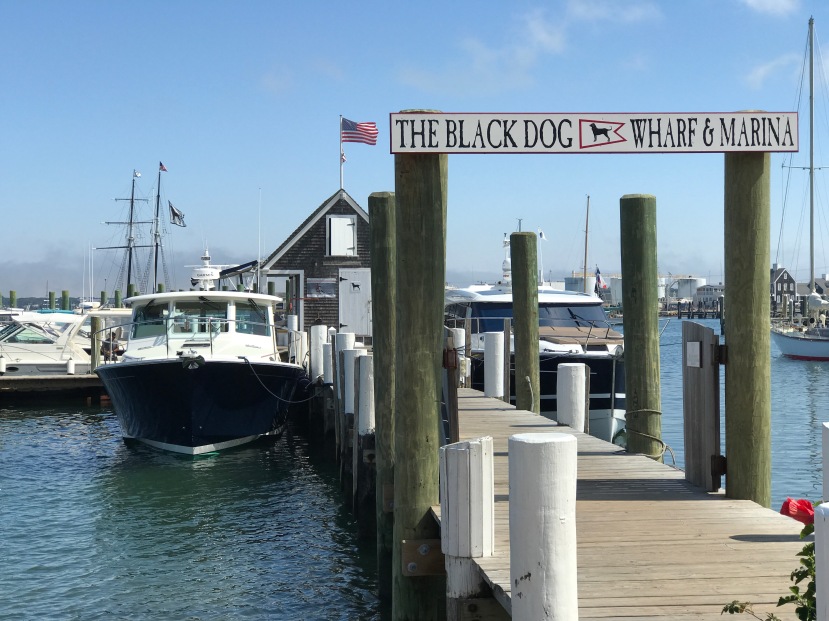 Always a Great Dock and Dine

We wasted no time grabbing a table inside and enjoyed a great lunch at The Black Dog Tavern.

Harpoon UFO’s and a Bloody 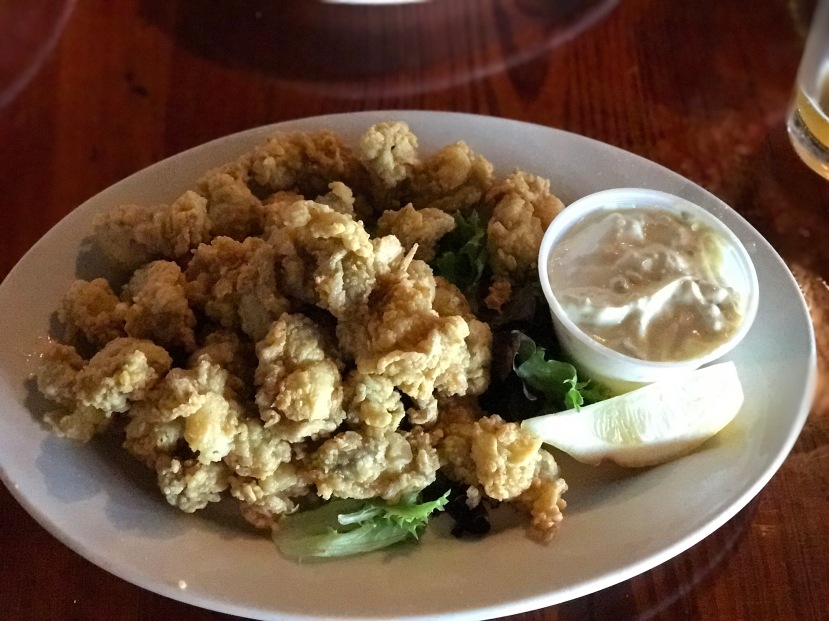 All three of the lunch meals we ordered were actually appetizers on the menu. They were all huge and we didn’t even finish them. Keep that in mind when you order at The Black Dog Tavern.

As we headed back to Vigilant I saw that the pea soup fog had returned. 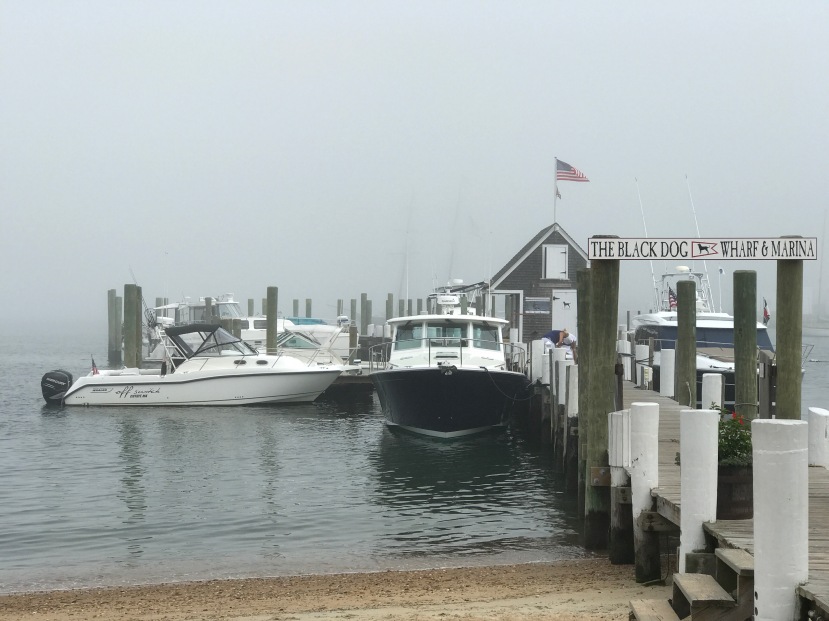 I was still a little shaky about that foggy Woods Hole debacle so I said “let’s just hang here for a while.”

I took out my guitar and premiered my first original song “A Prayer For The Cove” for Peter and Rudy. I’m still trying to work out the right rhythm and they really helped me a lot.

When we were Block Island my nephew Danny left a six pack of something called Lost Sailor IPA in the refrigerator. I decided it was a good day to try it out and I really liked it.

Thanks Danny – I may be switching from my Bud Light Aluminum Bottles.

After an ugly encounter with a woman hosing off her dogs, spraying Peter and Vigilant’s previously spotless starboard windows, the fog lifted.

I looked at the boys and said “I’m in no hurry to head home, but if it’s all the same to you, I’d like to get on the other side of Woods Hole before the fog comes back.”

Everyone agreed and I told the boys that I was taking them somewhere they’d never been. 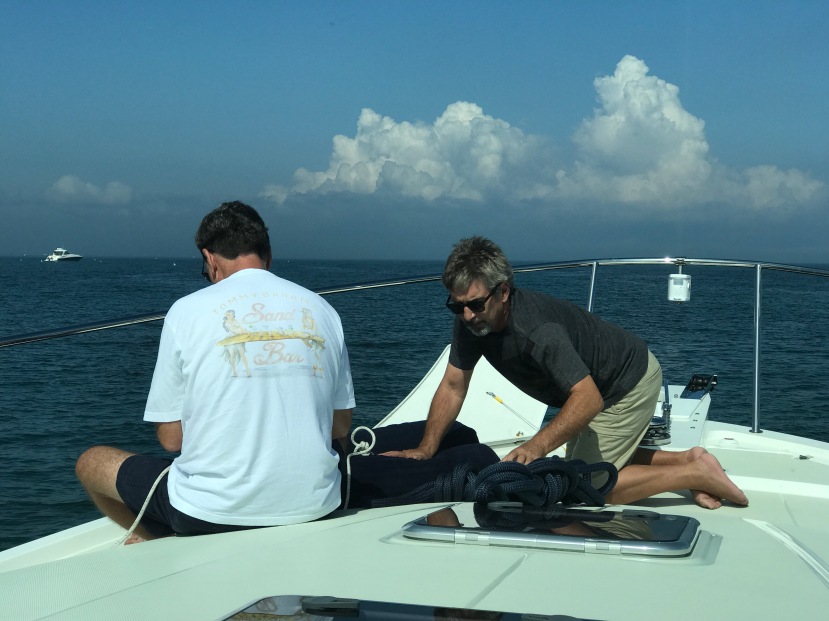 Peter and Rudy crewing – almost as good as Mrs. Horne!

As the crew stowed the lines and fenders I punched Weepecket Island in as our next destination.

Weepecket is literally 5 minutes past Hadley’s and with yesterday’s flat seas it looked more like Lake Winnipesaukee than Buzzards Bay.

We hung there for a while, but eventually it got to be too hot so we headed home.

I plotted our course, gave Buddy the helm and set the throttle to 13 mph as we eased across Buzzards Bay.

​​
Such a perfect Buzzards Bay Day. A terrifying run through Woods Hole in the fog followed by one of the most perfect afternoons I’ve ever seen.

This Bay never gets old!