By 1978, the company my father worked for since the 1950’s had finally gone public. With “a little change in his pocket”, and old knees that were growing weary of climbing into the Sunfish, he decided it was time for a serious sailboat.

I was working hard at DTS and studying my butt off for my MBA at Northeastern, so I wanted to cut loose and have fun on the weekends. The problem was that I could barely afford a new car, so I certainly wasn’t buying a boat. Instead, I started bugging Clyde once again to get us a new boat.

Back in those days, the only real sailboats in that class were the J-24 and various C&C’s.

The J-24 was a real nice sailing boat, but really didn’t offer any kind of cruising option. I started hunting around and a sailing friend who lived in Marblehead turned me on to The Banana Split.

The owner was a serious racer and he was stepping up to a bigger class. Since he primarily raced it, it had a lot of nice sails and the interior was barely used. Speaking of the interior, it was very well suited for overnighting for a couple. Up in the bow, was a head and sail locker with a curtain for privacy. The main interior had a table that converted to a double berth.

Susan and I were married on August 16, 1980. Neither of us (or our parents) had a lot of money for a fancy wedding, let alone a honeymoon, so we had a modest wedding in my parents back yard and went on a low-budget honeymoon cruise in the Banana Split.

We left on a Monday with a plan to stay in Padnaram the first night. After that, we’d go wherever the wind took us!

The sail over to Padnaram was perfect. We picked up a mooring and dined downtown. By honeymoon standards we were living the dream on a pauper’s budget.

Day 2 didn’t go so well. We woke up to drizzle and 20 knot winds. The Banana Split had a 6 HP outboard kicker and to get out of Padnaram, we had to head directly into the wind and waves. This also meant that I’d have to man the helm and the young Mrs. Horne would have to hoist the sails by herself for the first time!

Before we left the mooring, I went over every detail with Susan and she was confident she could do her job. We headed out and I told her it was time to set sail and she started hauling up the mainsail. This was her first time ever raising the sail and she (okay, may be me) forgot to close the little trap door that kept the sail clips in the track up the mast. Suddenly, the mainsail was flapping all over the place, connected to just the boom on the bottom and the main halyard!

To make matters worse, the waves were now so big that the outboard prop was coming out of the water every 5-10 seconds. I could no longer hold my heading and we turned around, gathered in our sails, and headed back to Padnaram for another night.

We reclaimed our mooring and later hailed a launch to take us back to town. After lunch, I called my brother Barry and asked him to come and pick us up. Barry would have nothing to do with it – “You’re on your honeymoon, I’m not picking you up, deal with it” he said.

Day 3 (Wednesday) we woke to sunshine and a brisk northeast wind. With the new wind direction, exiting Padnaram was a breeze (no pun intended) and we were beating down to Cuttyhunk in minutes.

It was one of those perfectly clear August Buzzards Bay days and with a 20 knot wind blowing over the port stern, we reached the outermost Elizabethan Island in no time.

Cuttyhunk was magnificent; warm, sunny, and totally isolated from society. In fact, the storm on Tuesday knocked out the phone lines, so I couldn’t even call Barry to thank him for not picking us up in Padnaram.

I’d love to post a few photographs, but we had borrowed Clyde’s 35 MM SLR and not knowing what we were doing, we exposed all the film trying to change the roll.

Back then, Cuttyhunk was a bit of a destination. Both the Allen and the Boswell House were open taking in guests and serving dinner (BYOB). After a great dinner at The Allen House, we went back to The Banana Split and listened to the Red Sox game on our transistor radio.

The second day on Cuttyhunk (Thursday) was just like the first so we decided to stay and try The Boswell House for dinner.

On Friday, we decided it was time to go, so we left the slip and tried to power out of the harbor. Once again, the little outboard keep popping out of the water and we turned around and headed back to Cuttyhunk.

By now, we were low on booze and the battery in the radio had died (no more Red Sox games before bed.) Our second dinner at The Allen House was fine, but it was time to go.

Over dinner, I explained to Mrs. Horne how we could escape the very narrow channel without using the engine by close tacking our way out. It would mean coming about every 30-40 seconds, but the tide would be high in the morning, so we’d be able to get very close to beach before turning. 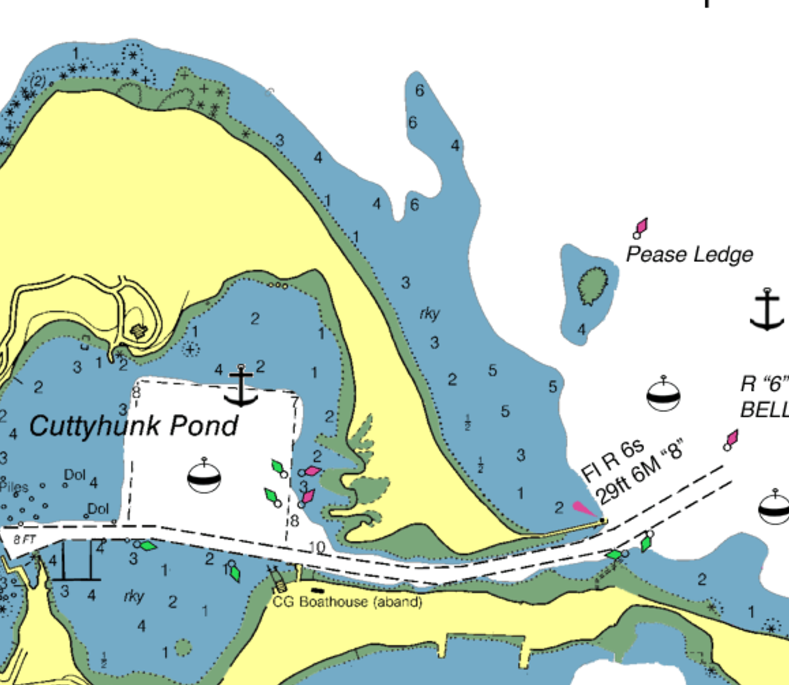 We were 25 miles downwind from Mattapoisett. Tacking all the way home meant we’d need to travel 50+ miles at 5 knots — close to 10 hours of sailing.

We left about 6:30 AM and successfully tacked our way into open ocean in about 30 minutes. We then started beating our way toward New Bedford and got back home around 4:00 PM.

Yep, The Banana Split was a sailing machine, but not a real cruiser. Fortunately Clyde’s next boat was a Pearson 35!