By 2014, Mean Kitty was getting a little long in the tooth. She was still pretty and very fast, but the warranty on the ETEC’s had run out and like I said elsewhere, we were ready for a more adult boat.

I knew my next boat had to be enclosed (to extend the season), still fast enough to go on all the day trips we’d been enjoying on Mean Kitty, and something we could live with for a long time.

Back Cove was on my short list, as was Hinckley, Hunt, Beneteau, Tiara, and Pursuit. The first boat that Mrs. Horne and I actually looked at was a Back Cove 30 at a Boston Yacht Sales opening house at The Chartroom (click here to read more about BYS).

We also got a seatrial on a Beneteau Monte Carlo 38, which was a very pretty boat, but not a Buzzards Bay boat. The bottom was kind of flat, so it pounded in 3 footers and it was very tough to see around the stylish windshield frame.

Although we never seatrialed a Tiara or a Pursuit, we did look them over, but Back Cove kept looking like the boat company that had designed the best boats for Buzzard’s Bay.

At this point, were still looking for an enclosed replacement for the big center console we had with Mean Kitty. Back Cove offered a version of the 37 called the Downeast, that boasted a very large cockpit and a flat fiberglass floor from stern to helm (which could be hosed down). We liked this because our younger guests still enjoyed swimming off the back deck.

We finally got to see a Back Cove Downeast 37 at the Maine Boat Show in Rockland!

The problem was that it was a limited production model and only about 10 had been built. BYS was trying to find one we could see, but there was nothing in New England. I contacted Lindsey at Back Cove and discovered there was going to be one at the Maine Boat Show in Rockland Maine so we decided to drive up and give it a look.

It really suited our goals perfectly. The Portland Maine dealer was selling the one we looked at, but after talking it over with Joyce at BYS, we decided to order a new 2015 from BYS. 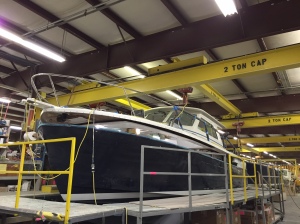 This was really the first time we’d every had a boat built for us. Lindsey (at Back Cove) was great and emailed me work-in-process photos every week or so. BYS and Back Cove okayed Mattapoisett Boat Yard to do the commissioning and warranty work which made the whole thing even sweeter.

We took delivery in early May of 2015 and enjoyed a great first season essentially using it the way we’d used Mean Kitty.

That said, in June we overnighted for the first time at The Sakonnet Club in Rhode Island. It was very nice, but it’s a pretty quiet place and didn’t really represent the kind of cruising adventures we’d discover later.

We also found ourselves doing more Gunkholing in Hadley’s and Quisett. I had a nice Breedlove Dreadnaught guitar that I stored in the shower and that was all I needed for me and Rudy to start doing ad hoc concerts from the cockpit.

Although we only did one overnight in 2015, we did extend our travels to Newport and Plymouth. We also shared our experience of the overnight at Sakonnet with friends and by 2016, several of couple friends told us they wanted to go overnight too!

Susan and I christened the 2016 cruising season with an overnight to Brewers Marina in Plymouth and then went to Newport with Gail and Rudy two weeks later. That’s where we were when Joyce from BYS texted me to tell me about the Sabre 42 that was just about to hit the market and thus got the whole buying cycle for Vigilant started (more on that later).

We loved Newport and returned 3 more times in 2016. We also ventured to Block Island for a big adventure at The Block Island Boat Basin.

Peter, Mary Lee, and The Admiral demonstrating how 3 could sleep in Tenacity’s dinette in a pinch!

As much as loved Tenacity, we loved our friends even more. The second cruising couple on Tenacity really had it rough. Not only were they sleeping on the convertible dinette (with it’s very firm 4″ so-called cushions), but they also were awakened by the sun or me very early in the morning. All of this would have bee fine when we were kids, but at our age, we needed our pillow top mattresses.

We totally loved our Tenacity, but she turned to be the boat we owned for the shortest period of time.