A few weeks ago Mrs, Horne commented that Vigilant is kind of like a Tiny House. I think she’s right. Even though she’s 46′ long, 14′ wide and weighs just under 15 tons, space is a premium.

If you ever watch any of the Tiny House TV shows (and there are many), you see people getting very creative finding ways to store their stuff in nooks and crannies. 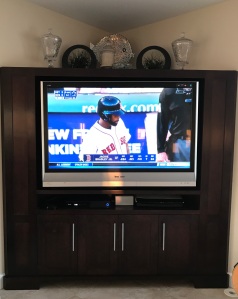 I met Jim Barrett when we were building our new home in 2007. We had installed a large number of high end Mastercraft cabinets, but we wanted a corner unit to fit in a limited space, provide some storage, house a large panel HDTV, and oh yeah, it had to match our Mastercraft cabinets exactly!

Jim delivered and while it wasn’t cheap, it was a big piece of custom furniture and it was well worth what we paid.

Fast forward to 2015. We had begun cruising in Tenacity and even more often, taking our friends out for a cocktail cruise, which meant keeping a few glass bottles of our favorite spirits on board.

My first solution was to find some padded bags to keep the bottles from breaking. I went to Amazon Prime and found some really nice neoprene cases from NY Built that would surely protect our precious nectar’s.

They did the trick, but our Back Cove Downeast 37 had limited cabinet space and our basic bar consumed 2 of our 4 galley drawers.

And, as the only qualified helmsman on board, it was impossible for me to tend bar while steering the ship. This meant my guests had to serve themselves and that created two problems.

First, the bottles were in drawers and covered in solid black neoprene, which meant locating one’s beverage of choice a total pain.

Second, the NY Built wrappers had a seam on the bottom, so you couldn’t just stand them on the counter – they needed to to be returned to their drawers after each drink made, which was cumbersome and likely to lead to a broken bottle. 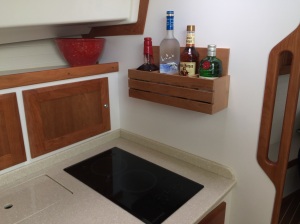 After a year of this it hit me that I should call Jim and have him build me a bottle rack for Tenacity.

It came out perfect – he even measured each bottle so there was minimal play in rough seas and the bottles were easy to remove and replace during Happy Hour.

Jim matched the Cherry from Back Cove and thanks to Jim’s simple design, I was able to install it myself.

This year, when Vigilant arrived, I knew I’d need a liquor bottle solution as well, so I call Jim and he met me on the boat.

There were a couple of walls where we could put a rack similar to the one on Tenacity, but we agreed it would look a little odd.

We settled on building a special rack inside the big drawer below the galley counter.

And while Jim was there. I also had him look at the cabinet above the sink to see if he could add a shelf to let me get two rows of glasses in.

He said “sure” before he realized that the hinge on the left needed the entire side of the cabinet — forcing the shelf to “float.” He also didn’t realize that the cabinet wasn’t rectangular until after he’d fabricated it, forcing him to rip off a 1/4″ tapered slice from the back. 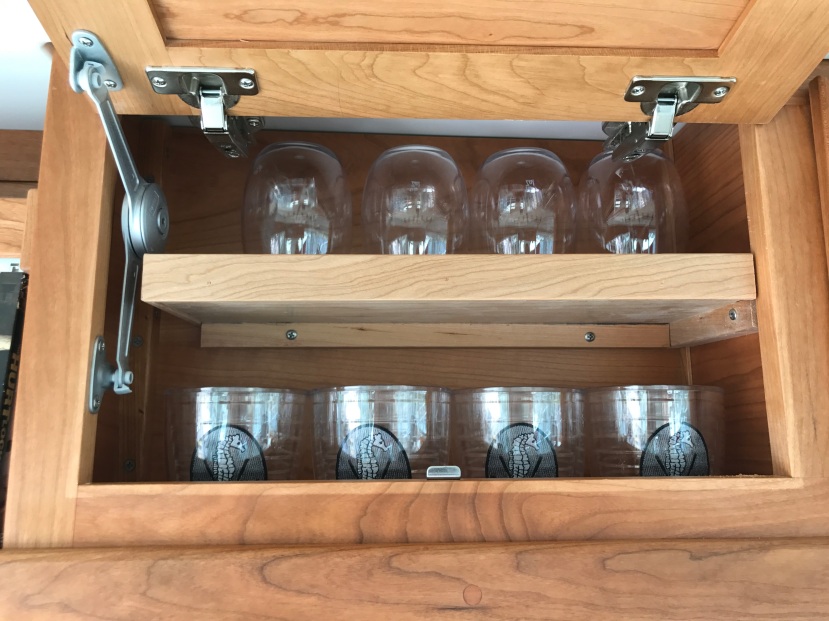 While Jim is not actually a “marine partner”, our floating Tiny House works far better thanks to his woodworking skills!

UPDATE: Jim just saw this story and informed me that he built custom yachts for 14 years before he went into cabinet making — it all makes perfect sense!