After a great early dinner on Friday at The Chartroom and a surprisingly pleasant gray day cruise to Edgartown, we wrapped up our annual weekend with the McGrath family with a visit to Cuttyhunk.

I haven’t been there is a while mostly because the food options are pretty sketchy. If you’re in the same boat, you may want to stay tuned, I think they’ve gotten better and may actually qualify as an eclectic Dock and Dine.

We woke up to fog and although there were signs of lifting all morning, it was still pretty murky when we set off at 9:30.

Cuttyhunk is located almost exactly due south from Mattapoisett. The only issue is Comorant Rock off of Mattpoisett neck and the fishing boat traffic coming and going from New Bedford.

Just outside the mouth of New Bedford harbor, the fog set in and visibility dropped to a few hundred feet. I fired up the radar and selected the Garmin Chart Overlay.

It’s a whole different world with Buddy (the Garmin Autoroute) steering the boat and the radar hits overlaid on the Chartplotter.

My job is to simply monitor the screen and look for blips that aren’t where a buoy or landmass are supposed to be while Buddy steers Vigilant. It’s about as low stress as you can get in pea soup fog.

The Island of Cuttyhunk

The mouth of the channel leading into the harbor is well marked, but the channel itself feels pretty narrow. Despite the narrowness, I found plenty of water close to shore.

There is a fairly square dredged mooring area that opens to your right as you enter Cuttyhunk Pond – just be careful because the edges outside the square are very shallow.

There are a ton of moorings in Cuttyhunk Pond that are operated by the town. If that’s your thing, call Cuttyhunk Marina on Channel 9 and they’ll set you up (first come, first served). There is no launch service, so you better have a dingy if you plan to moor.

Even if you don’t have a dingy, you can still cobble together a fairly good cocktail hour snack on a mooring by calling Cuttyhunk Shellfish Farms on Channel 72 and ordering boat delivery from their Raw Bar (5:15 to 7:30)

Having no dingy and just coming in for a lunch time Dock and Dine, I hailed the marina and requested a slip for Vigilant. It was about 11:30 AM on a beautiful August Sunday and they had plenty of slips. When we left around 1:30, it was getting packed, so if you’re plan is a Dock and Dine on a summer weekend, I’d suggest getting there early.

The Marina website says the cost for an day stay is $25, but the dockmaster asked me the length of my boat and when I told him 41 feet, he said “fifty dollars and you can stay for 4 hours.”

I later found a pop-up menu (that doesn’t show up on an iPhone) explaining the pricing:

The slips feature The Dreaded 4 Piling Back In, but Mrs. Horne is getting much better at it. In this case, she had four members of the McGrath family to assist her and all would have gone fabulously the first time if we’d started with the 6 lines on the right cleats . Oh well, maybe next time – seriously, I should have thought of this before we entered the slip area.

Once we tied up, I led the crew to the top of the hill on Cuttyhunk. This is probably the only “must do” thing on Cuttyhunk, but before I get to that, let me cover the Dock and Dine options.

Dock and Dine Lunch on Cuttyhunk

First of all, there is no sit down restaurant open for lunch, although there are a few picnic tables. There is also no liquor (or beer and wine) sold anywhere, but it’s pretty much a BYOB island.

While Cuttyhunk is accessible by a smaller boat, as Dock and Dine’s go, it’s ideally suited for picking up food and dining on your boat at the dock.

Here are the options:

The Lucky Dog Grill – This is your seaside source for Fried Foods, Burgers, etc. On Sunday it was staffed by two guys both taking orders, collecting cash, and plating  (well, they were actual paper boxing, not plating).

Thanks to Megan for capturing their menu. I’m fairly certain this is the first known publication of The Lucky Dog Grille’s menu on the Internet!

We had the burgers, hot dog, popcorn shrimp, onion rings, and fries. All were fine, but pretty much food truck fare. It’s also food truck prices which makes this an affordable Dock and Dine.

We talked to a guy who had ordered the Fried Lobster Roll (served with melted butter on the side). He described it as “kind of like Popcorn Shrimp, but lobster.” 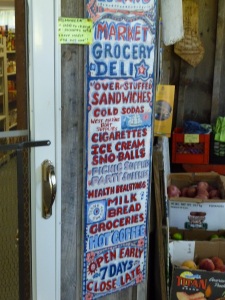 Years ago we came here in Mean Kitty with Natalie and Brian on the 4th of July and the only thing open was the Grocery Store.

We had them hand make deli sandwiches for take out and they were quite good – although it was a little challenging eating them in our center console.

They also have a fairly good inventory for snacks, deserts, or even cooking on the boat.

I think I would have been happier on Sunday with a sandwich from the deli and some fries from the Lucky Dog.

If you’re looking for lobster rolls that aren’t fried, this is your place. 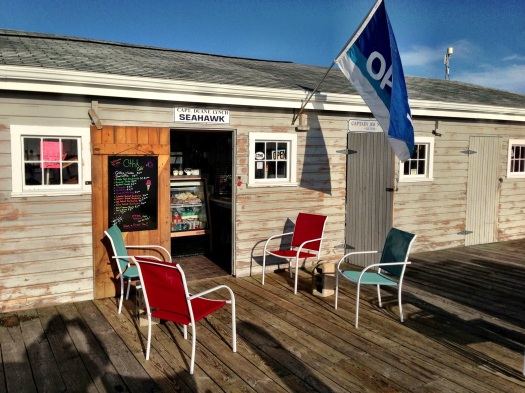 I erroneously stated that the Cuttyhunk Cafe was the evolution of the old Ice Cream shop, it isn’t.

After posting this, I was contacted by the owner who told me the following:

“Both the Cafe and Lobster Shack are owned by Duane and Lexi Lynch. Duane is a Local Fishing Guide.”

“They serve Steamed Lobster, Clams and meals come in Tins ready to take back to your Boat, Butter included. They also include Potatoes, Corn, and a piece of Chorise.”

“You can order at 4:00 or during the day at the Cafe and your meals will be ready at the time you selected. Anywhere from 4:00 pm until 8:00 pm. They will even lend you the Crackers if you need them.”

This is the seaside operation of Cuttyhunk Shellfish Farms. They have the same menu as the floating cocktail hour raw bar boat that I mentioned earlier.

By the way, both the Raw Bar and Cafe are located on the main pier which does have a few spots to tie up briefly.

We tied up on Memorial Day Weekend in 2016 and had oysters, cherrystones, and ice cream. I can attest that the shellfish was quite fresh and very sweet. The Ice Cream tasted homemade. Tenacity at the end of the Cuttyhunk Pier in 2016

If you’re looking for an overnight adventure, I think Cuttyhunk fits the bill. The folks who stay in the slips are pretty much all transients. From my experience, they are friendly and it’s the kind of place where you can set up a chair behind your boat and greet folks walking by (Mrs. Horne’s favorite marina pastime).

You can book an overnight on Dockwa and it’s a pretty affordable overnight stay ranging from $1.50/foot (shoulder season) to $2.50/foot (summer). They offer power for $20-$30, but have issues with their pump boat this summer, so don’t show up with a full tank!

Since the Allen House and Boswell House closed, the only real “dinner spot” has been Soprano’s. This is a very eclectic spot that is only open for dinner (5:30 – 8:00).

It was originally just pizza, but now it sports some seafood dishes as well as a couple of salads and chowder.

Ahab’s Swordfish – Fresh to you from the proud fishermen of New Bedford, our 1/2 pound swordfish steaks are caught just like Ahab’s whales. We season them with sea salt, fresh milled pepper, and prepare them in our own clarified garlicbutter. Served with mixed greens and garlic knots.

This is a new spot that has appeared in the last few years. It’s a further expansion by the Cuttyhunk Shellfish Farms which also does catering on the mainland as well as the island.

It’s a bit less eclectic than Sopranos and it does overlook Cuttyhunk pond, making it a seaside eatery. 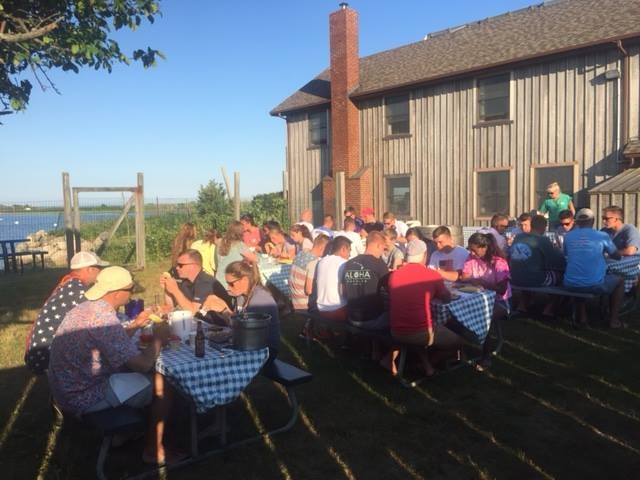 “Scuttlebutt grill is open usually Tuesday through Saturday but we do close for private parties. It’s open 5:30 to 7:30 – BYOB and has shrimp and chicken skewers, full raw bar menu, grilled oysters, soft drinks and hot dogs/hamburgers.

It’s very simple and quite fun. Once a week there is trivia but that varies on the day. Usually Thursday, Friday or Saturday. Mondays we also do lobster dinners but you need to preorder by 4:00 PM at the raw bar on the fish dock.”

Finally, I noticed a red shack near the Lucky Dog Grille that says “Baked Lobster” and “Clams” on the side. It also said “opens at 4:30”. I asked the guys at the Scuttlebutt Grille about it, but all they had to offer was “it’s not ours.”

The Walk Up The Hill

As I mentioned earlier, we walked up the hill before lunch. There are no long walks on a one mile island, but with the incline, the trek to the top of hill is good little hike.

At the top of hill, there is an observation tower that was little tricky getting up to.

There is also an antenna tower and some sort of fenced in power station along with the remnants of the old windmill that stood up here when I was a kid. I’m not sure why it’s gone.

From the observation tower you’re treated to incredible views of Buzzards Bay, Vineyard Sound, and Rhode Island Sound — as well as Cuttyhunk Harbor.

Cuttyhunk and Rhode Island Sound in the distance

After our hike and lunch, we hit one of my favorite gunkholes for swimming, music, and cocktails. It’s just inside the jetty as you leave the channel.

I personally had a wonderful ride back to Mattapoisett with Mrs. Horne and Amy doing the driving (well, actually just keeping an eye out for boats and lobster pots while Buddy drove).

Sadly, as I mentioned yesterday, Gary’s iPhone 7 fell overboard halfway home. Just before he lost it, he shot this great parting video capturing the cruise home and Mrs. Horne’s helmsmanship!